Congratulations to FFPP Mentor Moustafa Bayoumi (Brooklyn College)won the 2016 Arab American Book Award for his This Muslim American Life:  Dispatches from the War on Terror (NYU 2015)! 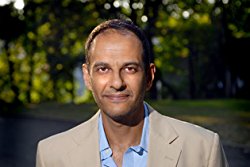 His book argues “To be a Muslim American today often means to exist in a space between exotic and dangerous, victim and villain, simply because of the assumptions people carry about you. In the gripping essays in This Muslim American Life, Bayoumi exposes how contemporary politics, movies, novels, media experts and more have together produced a culture of fear and suspicion that not only willfully forgets the Muslim-American past, but also threatens all of our civil liberties in the present.”