Organization of American Historians (OAH) president Edward L. Ayers announced Kingsborough History Professor Libby Garland as the recipient of the 2017 Germany Residency Program Award in American History at the University of Tübingen, thanks to a grant from the Fritz Thyssen Foundation. As Scholar in Residence, Prof. Garland will teach a seminar on a U.S. history topic of her design.

Prof. Garland will teach “Guarding the Gates: Creating and Policing the Borders of the United States.” The class, to be offered to students in the University’s U.S. history program, will explore the social, cultural, and legal history of U.S. efforts to establish and police its international borders, with particular emphasis on questions of migration control. 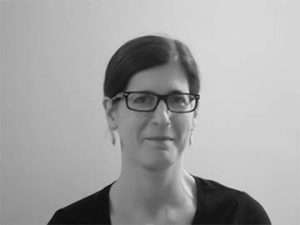 “As a scholar of U.S. immigration law and U.S. borders, I have closely followed the unfolding debates in Europe over migration and borders,” said Prof. Garland. “In light of these debates, I hope this course will make for particularly meaningful study and discussion for students at the University of Tübingen.”

Prof. Garland, who is looking forward to teaching in Germany at the university level, previously spent a semester of undergraduate study at the University of Freiburg. She later taught English for a year at a public high school in the former East Berlin, during the period when the educational system was just transitioning to a West German model. Most recently, she returned to Germany to conduct archival research for a new project about the postwar international work of trade unions.

“This is a great accomplishment for Prof. Garland, and an even greater recognition of our faculty’s impact on students locally and globally,” said KCC History, Philosophy & Political Science Department Chair Michael Barnhart. “Given the evolving global conversation about immigration and border protections, students enrolled in Prof. Garland’s course will be engaged in lively and active dialogue about this all-important conversation. We are proud that she will be representing Kingsborough, and the Organization of American Historians with this terrific honor.”