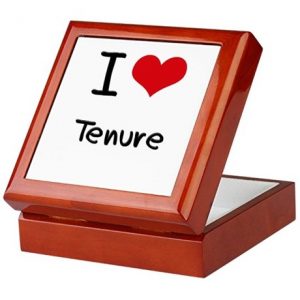 During my recent promotion process, I began using the term “magic box” to describe the actual storage container, several in my case, that faculty members must use to report their scholarly productivity, teaching and service when applying for either tenure or promotion, or both. On multiple occasions, I had heard about the need to file hard copies of all academic materials, which would then be scrutinized by diverse tenure and promotion committees throughout the application process. Nevertheless, I was still not sure of what the actual box should look like—so that was how the term “magic box” came into existence. I thereafter began to use it to vaguely name an object that I knew would be needed throughout the promotion process, and that I knew would have the power to change the odds in my favor (despite the fact that I still was not quite certain about what was supposed to go in it). Lo and behold, I discovered that I was not alone.

Although most faculty members keep a careful record of their multi-tasking activities—including a well formatted and up-to-date curriculum vitae—not all of us are aware of the need to routinely collect detailed “evidence” of our daily academic routines and contributions. And by “evidence” I mean anything, and everything, that can eventually be considered a sound record of our itemized achievements: from a formal letter confirming a book award and an approved budget for an NSF grant, to an e-mail from an editor thanking us for reviewing an article.

Given the fact that standards differ across universities, colleges, divisions, programs—and that they even change within departments over time—there isn’t a one-size-fits-all rule when it comes to showing evidence of our productivity and service. In some divisions, copies of a slideshow of an important keynote presentation can strengthen a candidate’s record, but in others, these materials may be considered superfluous.

While doing my own “bean counting” to update my scholarly feats, I realized that I had not been keeping and filing all the materials that appeared in my C.V., and actually found many important things that were missing. A regrettable example of this was the fact that although I had received early promotion (to associate professor) at my former institution, I did not have any material evidence to prove it. Subsequently, I quickly turned into a sort of “scholarly detective” and began searching franticly—and finding one by one—all of my missing records, including a form from my former institution’s human services office, which confirmed my early promotion.

Today, I secretly cherish my three huge “magic boxes” that remain piled on top of each other in a corner of my office. They are the material proof of my—by now—long trajectory in the academic world. Even if painful, the exercise of making the boxes visible forced me to become accountable to myself, and others, with respect to the enormous amount of work, and resulting accomplishments, I have amassed throughout the years. Although the physical box will hopefully soon been replaced by faculty’s electronic files—as is already the case at most CUNY colleges—its symbolic meaning will probably remain for years to come.

As a mentor for the Faculty Fellowship Publication Program (FFPP) for the third year now, one of the recurring themes that keeps coming up in my groups is how to handle rejection. And although by “rejection” we may mean different things, the underlying question that our colleagues often ask is how to deal with rejection without taking it personally and in a non-emotional, objective way — so they can tackle whatever changes need to be made to their written pieces and move on.

The meritocratic ethos of the academic system makes us believe that if we work hard enough, play by the rules and do what we are asked, our lofty commitment (and sacrifices) to scholarly excellence will be acknowledged and, consequently, our jobs will be secured and the desired funding awarded. Unfortunately, that is no longer how academia works: the ongoing cuts to federal grants and the increasing pressure to publish — along with the backlash in the academic market — means that the scholarly cake has become smaller, while the number of those hungry for a piece of it keeps getting larger. Grant agencies and reputable publications are receiving many more submissions than they can possibly fund. Journals like “Nature,” as an example, currently reject more than 90% of submissions.

Not surprisingly, being rejected has many concrete effects in people’s lives and often feels deeply personal. To put it simply: Rejections sting and are either openly or secretly painful to many of us. And in my experience you can’t deal with rejection by just repeating the mantra “it’s not personal” over and over again. Indeed, quite the opposite is true: rejection feels personal because its effects can be devastating to one’s future career. After months of working hard on a grant application, a letter of rejection may lead to a frenzied panic — this may be the case for assistant professors going up for tenure as well as for senior colleagues who are counting on key external funding that will allow them to keep their laboratories and postdoctoral mentees afloat. Rejection is personal because being denied a fellowship leave may mean not being able to travel overseas to collect the precious archival data required to finish a book manuscript, just in time for the tenure application. Or it may mean not getting the invaluable release time that could lead to finishing a competitive grant before its deadline. Rejection is personal because all those weeks and months we spent working on a long project — often in isolation— meant taking time away from our families and kids, our friends and hobbies. And rejection is personal because, either openly or secretly, our academic egos are supported by the principle that our core self-worth is intrinsically dependent on the acceptance of our peers.

At the FFPP, we talk about learning how to perfect the scholarly craft of handling rejection, but we also open up about how rejection aches and how important it is to allow ourselves time to grieve and share our frustration, and get encouragement from people we trust. To that end, we are working on building a network of peer reviewers that will collectively contribute to creating a healthy community of scholars. We aim at developing strategies to enrich our intellectual and emotional lives with a view towards welcoming rejection letters as “just another day on the job” that will eventually lead to our articles and grant proposals being accepted — without hurting ourselves emotionally along the way. In fact, it is not just by learning to separate our academic work from our personal selves that we will become stronger fighters against the perils of academic rejection. It is by enriching our lives with “intellectual soul mates,” within safe and enriching spaces, that the pains of rejection are eventually turned into success.